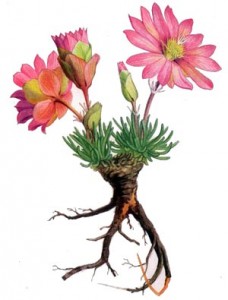 As with many herbs native to North America, Native Americans used bitterroot as both a foodstuff and a medicinal treatment.

Bitterroot was considered a delicacy to the Native Americans, and they would eat it with either sugar or salt.

During the Lewis and Clark Expedition, Meriwether Lewis gathered many specimens of bitterroot and brought them back on his return trip. He was honored with the botanical name, Lewisia rediviva, for his efforts.

Bitterroot, often called gentian, is used in Europe as a treatment for anemia. Gentian stimulates the digestive tract, promoting reabsorption of iron and other minerals.