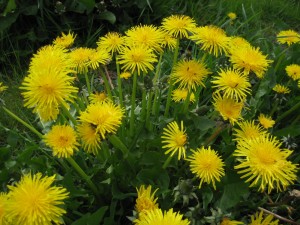 Dandelions are native to many regions, including North America, Europe, and Asia.

The name ‘dandelion’ comes from the French dent de lion, which means ‘lion’s tooth’. But the plant has many other interesting names as well. In Italian, dandelions are called pisacan or ‘dog pisses” because they often grow next to sidewalks and roads where dogs pee.

It’s quite easy to confuse other plants with the dandelion. These impostors even have a name, ‘false dandelions’. The differences between the two include details about how the flowers develop and the texture of the leaves.

Dandelions have been around for over thirty million years, and have been part of the human diet for just about as long as the human species has been around.

Dandelions have been eaten by humans since before recorded history. Both the buds and leaves of dandelions are used in traditional Korean, Chinese, and Greek cooking for example. The leaves can be boiled to reduce their bitterness.

Dandelion flower petals can be combined with a few other ingredients to make dandelion wine. Even the roots can be turned into a caffeine-free coffee.

Dandelion has many uses in herbal remedies, but is arguably most effective as a diuretic and laxative.

If eaten, severe allergic reactions to dandelion pollen are possible. The leaves and stems contain small amounts of latex which can cause contact dermatitis in sensitive individuals. This is same reaction that’s possible from latex-sensitive individuals wearing exam gloves that contain the substance.