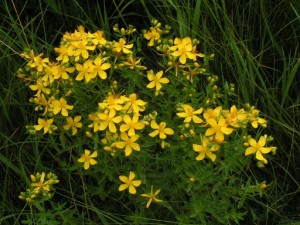 When you mention St. John’s wort you could actually be referring to one of over three hundred different species. The name St. John’s wort is non-specific to a particular species, but most of the time if your hear the name, you’ll probably be talking about Hypericum perforatum.

The herb exists all over the world and is a very aggressive-growing plant. It has yellow flowers which have oil glands inside. These glands can be seen if you were to hold a St. John’s wort flower in front of a bright light.

The ‘wort’ in the name is just an old form of an English word for ‘plant’.

Some other uses for St. John’s wort include:

St. John’s wort can be crushed and made into an oil. This oil has been used to treat skin abrasions, muscle aches, burns, and various types of insect bites.

The 11 Best at Home Remedies for Ringworm

The 20 Best Home Remedies for Rosacea

What Others Are Reading

Get Healthy Fresh Updates in Your Inbox

Enter your email address below and we will send you monthly updates with our newest discoveries that help make healthy living easy, fun, and inexpensive for you and your family!