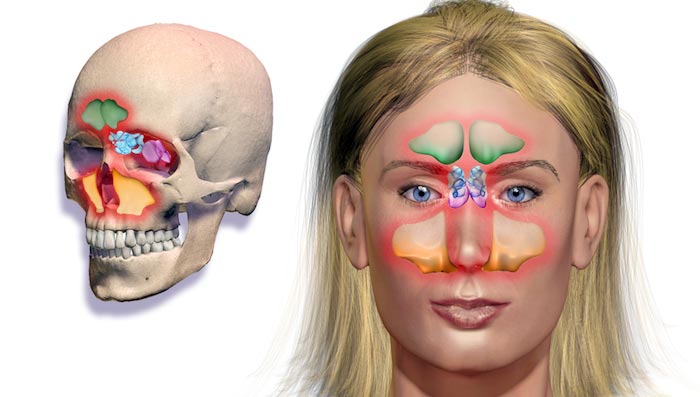 Have you ever felt like you’ve had a cold for…like forever? Turns out, you may not have a cold at all. You could have what are scientifically called nasal polyps.

What Are Nasal Polyps?

When you suffer from allergies or when you get a cold, the mucous membranes lining these nasal passages will swell up, potentially causing nasal polyps to start to grow. In fact, 30% of people with nasal polyps, test positive for allergies.

Although almost everybody has nasal polyps of some kind, if they get too big, they can make it harder for you to breathe – that’s when you have a problem. The polyps can also look quite unpleasant when they start to protrude out of your nose! (Warning: gross pictures of large nasal polyps.)

How Can I Tell If I Have Nasal Polyps?

Depending on the location and size of your nasal polyps, it might be difficult to see them. You could try using a small makeup mirror to look into your nose, while shining a bright flashlight up each nostril.

Some polyps are far back in your nasal passage, near your sinuses, so you’ll probably have to see a doctor to verify their presence. If you notice some of these symptoms, it’s worth a quick visit to rule out the presence of polyps:

If your doctor determines you have nasal polyps, they’ll probably start you off with a nasal spray, called a corticosteroid spray, that will shrink the polyp. While these sprays often improve your symptoms, in some people the polyps can return.

Some things that usually don’t work are decongestants and antihistamines.

In less common cases, your doctor might have to surgically remove the polyps. Don’t worry, this is usually done in an outpatient setting (you can go home the same day), and it’s not like getting major plastic surgery on your face or anything like that! 😉 Read more about the surgical removal of nasal polyps.

Like many health problems, polyps are the results of a chronic underlying problem, in this case usually bad allergies or the specific way in which your sinuses and nasal passages formed as you grew up.

When it feels like you have a stuffy nose – and you know you don’t have a cold – it might be worthwhile to look into whether or not you have nasal polyps. While it sounds gross to have a blob of tissue growing far up in your nose, it’s not all that uncommon, and fortunately doctors have figured out a way to make them smaller or remove them completely.

If you want to learn more about nasal polyps, check out these resources: